The seed of today’s Merrick Community Services was planted in 1908 when Mrs. H. T. Quinlan founded the Christ Child Society in St. Paul.

Mrs. Quinlan followed the settlement house model of the Christ Child Society, which was established twenty years earlier by Mary Virginia Merrick in Washington. D.C., in response to the needs of immigrants. In time, the Christ Child Society became a national network of social services. Between 1908 and 1926, the Society’s neighborhood center occupied five different sites but remained in the vicinity of Railroad Island, the first home of newly arrived immigrants in St. Paul.

Mrs. HT Quinlan Organized the St. Paul Chapter of the Christ Child Society in 1908
Funds from the United Way’s Buildings for Youth campaign were used in 1958 to construct a new community center on the corner of Edgerton Street and Minnehaha Avenue — changing the organization’s name to Merrick Community Services.
In the 1970’s, Merrick was invited to take over other programs in the Dayton’s Bluff neighborhood and in Roosevelt Homes, a low-income housing community on St. Paul’s East Side. 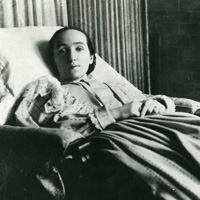 Mary Virginia Merrick circa 1942
This resulted in opening multiple food shelves and adding seasonal programs for back-to-school and holiday needs.
Today, Merrick continues to serve over 15,000 low-income and immigrant individuals and families in various locations via its Employment Services, Nutrition Services (Food Shelves), Youth Services, Family Services, and Senior Independence Programs.
Merrick Community Services has been working in partnership with Saint Paul’s East Metro since 1908. We look forward to continuing to serve the community and working together to improve the lives of the residents by supporting individuals and families to navigate life transitions, find health and stability, and promote independence.